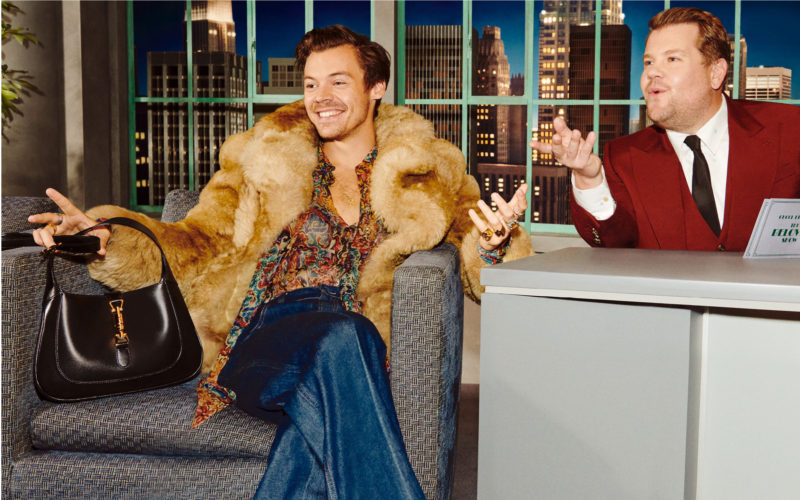 Including sustainability news and a new high-fashion job for BTS.

For Gucci’s new campaign, creative director Alessandro Michele has conjured up the fashion house’s own version of a late-night talk show, bringing fame, light-hearted banter and Gucci bags into our homes with the Beloved show. Michele tapped none other than James Corden to host, and selected a string of treasured stars as guests: Harry Styles, Serena Williams, Diane Keaton, Awkwafina, Dakota Johnson and Sienna Miller. Each celebrity will share a candid and comical two minutes with Corden and their most beloved Gucci handbag, of course (you can expect to see the Dionysus bag and Gucci Horsebit in the spotlight).

“We decided to show the concept of ‘beloved’ in an ironic way in the campaign, being inspired by the fact that bags are the protagonists in my life and in the lives of many other people,” explains Michele in a press release. “And now we have them in a show and twisted with the idea that there were two stars: the bag and the actual talent. A game of cross-references between the two great protagonists.”

Reebok and Cardi B drop their first-ever collaborative apparel collection

Reebok has paired up with rapper Cardi B on an apparel capsule called The Summertime Fine Collection. The collaboration between the artist and sporting goods giant launched on April 23, with form-fitting wares that can transition from the gym to the streets seamlessly. Waist-cinching details and contouring seams paired with mesh cutouts and pops of bold red and pastel purple headline the collection, which also shares the shelves with matching styles in Cardi B Club C footwear.

The collection draws inspiration from the ’90s, with nods to vintage Reebok apparel and New York-native Cardi’s distinct memories of summers spent on the Coney Island boardwalk with friends. All apparel is available in sizes 2XS to 4XL.

Veteran sustainability-driven fashion designer Stella McCartney is celebrating the 20th anniversary of her eponymous label. To mark the occasion, she teamed up with Greenpeace in support of its campaign to halt deforestation in the Amazon, an act largely marshalled by industrial agriculture and meat production. This alliance yields a small Stella McCartney capsule (which launched on Earth Day) featuring vintage eco-activist graphics across two T-shirts and two sweatshirts, in marbled white and pale blue colourways.

The capsule’s soft organic cotton align’s with the label’s ethos and longtime commitment to being a zero-deforestation brand — it never sources materials from ancient or endangered forests. Deforestation in the Amazon reached a 12-year high in 2020, making awareness of this issue an urgent priority. Shop the Stella McCartney x Greenpeace capsule at stellamccartney.com.

To celebrate Earth Day, Vancouver-based label Smash + Tess partnered with local non-profit Central Westcoast Forest Society (CWFS), an organization that works toward the conservation of endangered wild fish through habitat restoration, research and monitoring. The clothing brand has designed a limited-edition Sunday Shorty Romper in the colour “westcoast moss,” and will donate $5,000 from romper sale proceeds to the CWFS Triple Plank Event, a skate, snowboard and surfing contest that fundraises for CWFS programs. The romper is crafted from a soft bamboo-cotton rayon, and is available in sizes 2XS to 3XL. In addition, Smash + Tess will support CWFS’s 2021 fundraising goal of $20,000 through a donation auction available on smashtess.com at checkout.

This week, Louis Vuitton announced its latest brand ambassadors: the wildly popular pop group BTS. The South Korean band is highly influential and revered worldwide, with multi-platinum albums and singles to show for it. “I am delighted BTS are joining Louis Vuitton today. I am looking forward to this wonderful partnership which adds a modern chapter to the House, merging luxury and contemporary culture. I can’t wait to share all the very exciting projects we are working on,” said Louis Vuitton’s Men’s artistic director Virgil Abloh in a press release.