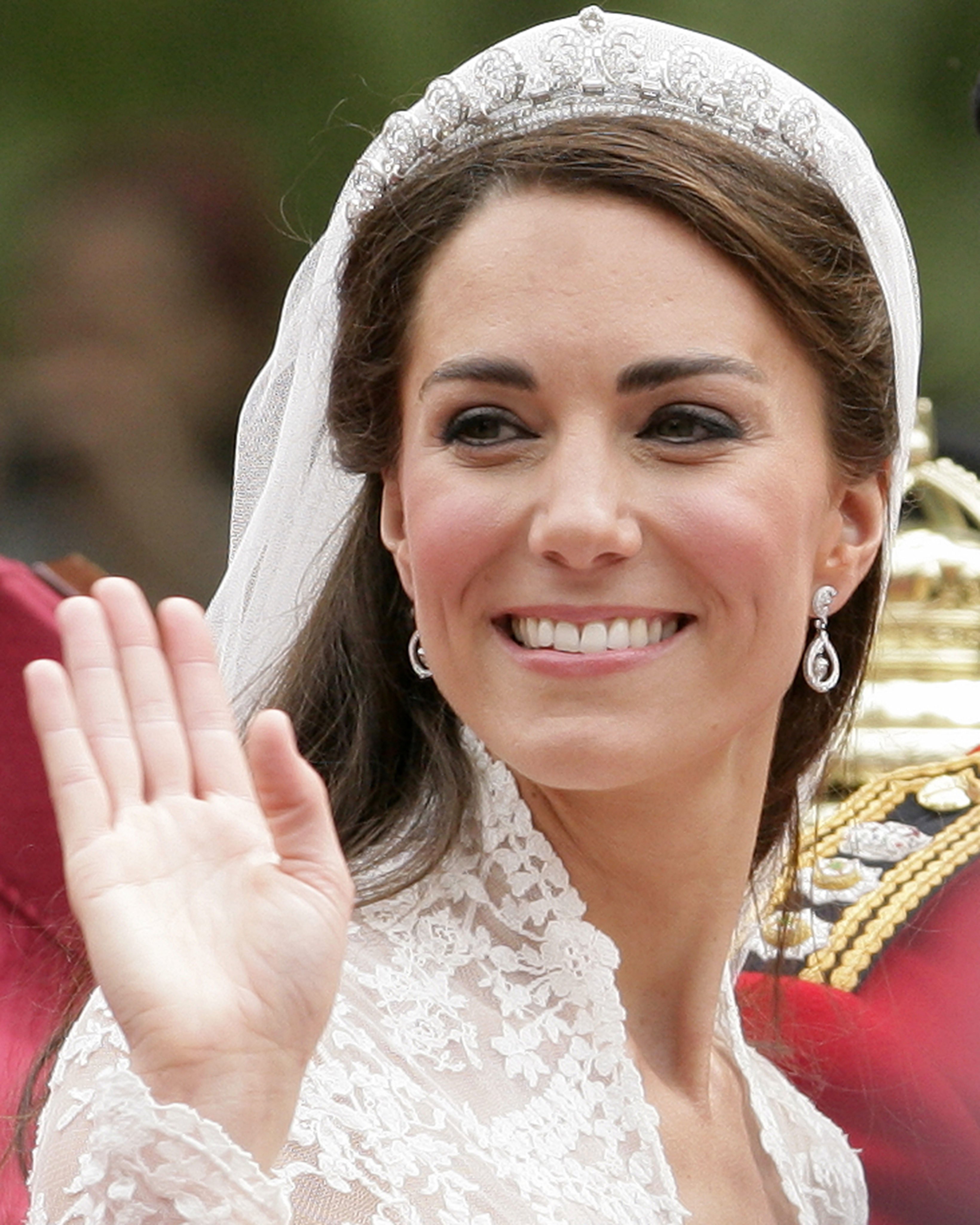 As the Duke and Duchess of Cambridge celebrate a decade of marriage, we’re looking back on Kate’s legendary Alexander McQueen wedding gown — and the hours of handwork that went into creating it.

A decade ago, Kate Middleton stunned royal watchers around the world when she stepped out onto the red carpet leading into Westminster Abbey and finally revealed the first full look at her wedding dress — a closely guarded (but oft speculated about) secret until that moment. Now, in honour of Kate and Prince William’s 10th anniversary, we’re looking back at all the intricate details of the iconic gown that has since inspired many a bride.

English designer Sarah Burton, creative director of beloved English fashion house Alexander McQueen, was responsible for the gown. It featured a lace bodice, high lace collar, long sleeves and satin skirts. According to the palace, Kate opted for the label because of “the beauty of its craftsmanship,” and wanted her dress to “combine tradition and modernity with the artistic vision that characterizes Alexander McQueen’s work.”

Kate also reportedly worked quite closely with Burton on the delicate design of the dress, which was inspired by traditional arts and crafts while “giving the cut and the intricate embellishment a distinctive, contemporary and feminine character.”

What materials were used to make Kate’s wedding dress?

Naturally, mostly locally sourced white and ivory satin gazar — all carefully handpicked by Burton and her team — were used to craft Kate’s Grace Kelly-esque dress. More notably, a blend of English Cluny and French Chantilly laces was used and worked into the gown using the Irish Carrickmacross lace-making technique, which is an Irish needlework tradition that dates back to the 1820s. The entire lace appliqué (seen on the bodice and skirt of the gown) was hand-made by the Royal School of Needlework. According to the BBC, the lace calls back to Princess Diana’s own wedding dress, which also featured Carrickmacross lace.

Tell me more about the intricate lace work on Kate’s dress.

As mentioned, staff, grads and even students of the Royal School of Needlework painstakingly worked on the lace details. In fact, workers washed their hands every half an hour to ensure the lace stayed pristine, and needles were replaced with new sharp ones every three hours.

In the end, the lace was turned into tiny, beautiful floral patterns that were stitched onto silk tulle. The symbolic design included roses (for England), thistles (for Scotland), daffodils (for Wales) and shamrocks (for Ireland).

What other design details were included in Kate Middleton’s wedding dress?

You probably wouldn’t be surprised to hear a lot of thought went into the gown for Kate’s big day. According to the Palace, the Victorian-inspired corsetry on the bodice was a nod to a McQueen design trademark, and padding was added to the hips to complement the narrow waist. The back of the gown also featured 58 gazar and organza covered buttons, which were fastened by Rouleau loops.

Is it true Kate hid her “something blue” in the gown?

Yes! Burton cleverly sewed a blue ribbon inside the dress to keep with the old tradition. A new pair of earrings (inspired by the Middleton family’s coat of arms) gifted to Kate by her parents were her “something new,” while the Carrickmacross lace work covered the “something old.” Of course, the “something borrowed” was the Cartier Halo tiara Kate wore — the sparkling piece (which houses 1,000 diamonds and a large gemstone) was originally a gift to Queen Elizabeth II from her parents on her 18th birthday. (Her father, King George VI, initially bought it for his wife.) The tiara was reportedly secured to Kate’s head with a braid and held her elegant veil, which featured a trim of hand-embroidered flowers, in place.

How long was Kate’s train?

While the train on Kate Middleton’s wedding dress didn’t break any records — that honour still belongs to Princess Diana’s 25-foot-long showstopper — it was still a sight to behold. (Who can forget the sight of Kate’s sister Pippa adjusting it for her?) The jaw-dropping train came in at about nine feet long, and the underskirt beneath it, made with silk tulle to create shape, was designed to make the bottom of a dress resemble an opening flower.

What about the shoes?

While Kate’s flowing gown may have hidden her shoes from view, rest assured, they were also stunning. The ivory satin heels were also custom-made by McQueen and featured additional lace embroidery by the Royal School of Needlework.

Did Kate also have a second wedding dress?

You’ll likely remember that Meghan Markle changed out of her Givenchy gown (created by British designer Clare Waight Keller) into a sleek Stella McCartney dress for the evening reception. Kate did the same, swapping her heavier gown for a simple (yet still gorgeous) cathedral-length gown, also by McQueen. Her second dress included diamante detailing at the waist, and was paired with a cozy angora shrug.