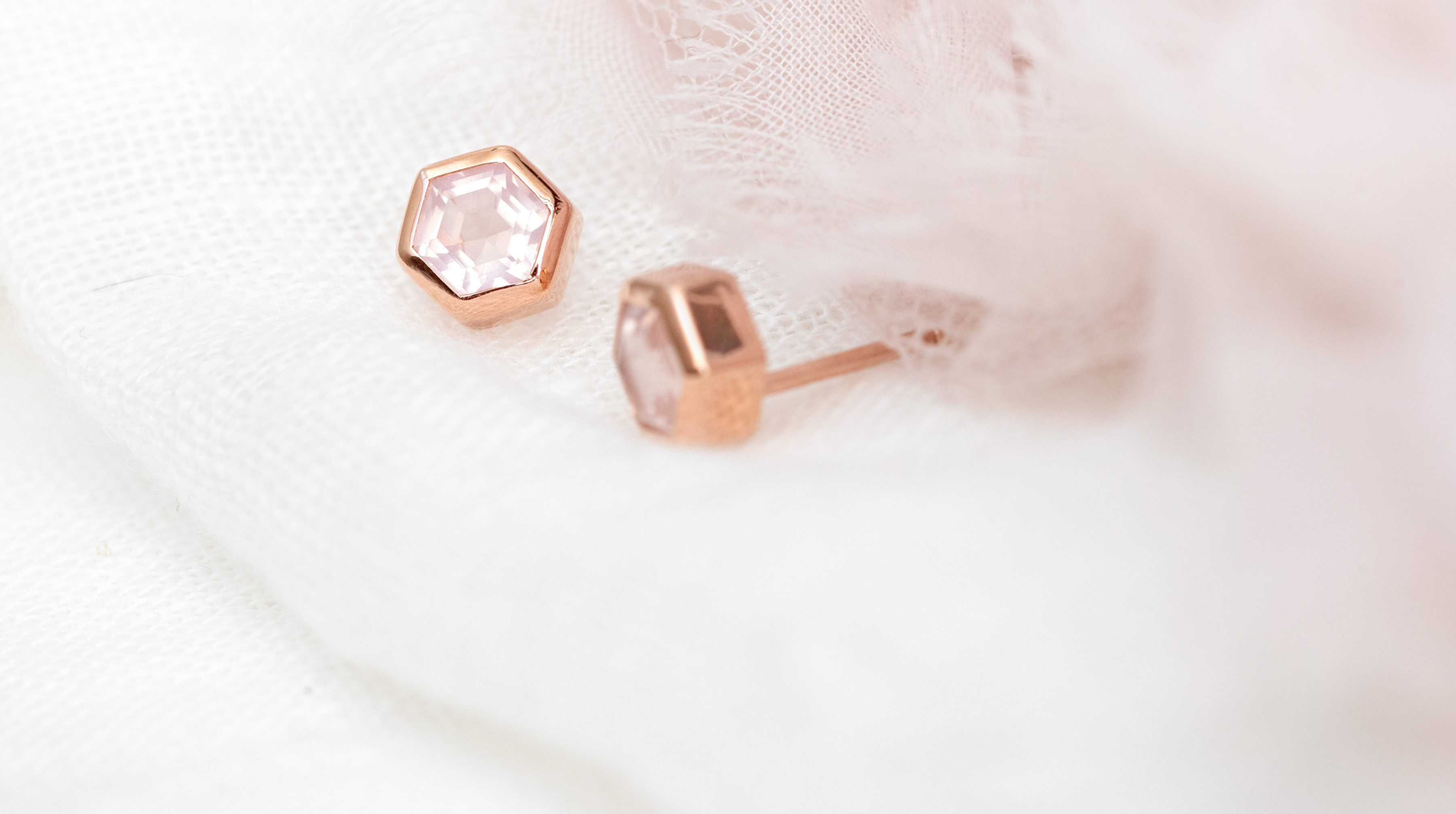 “I’ve learned that through the power of being honest and vulnerable and sharing our story, we can make a difference.”

As director of operations at Paris Jewellers, Chau Lui — who co-owns the Edmonton-based company along with her sister, Trang — has quite a legacy to maintain. The duo’s parents, who moved with their young children from Vietnam to Canada, founded the business after training as goldsmiths once they had arrived in their new home country. Honouring this endeavour, as well as their ancestry, has motivated the sisters to launch The Asian Heritage Hope collection, a new set comprised of stud earrings and a pendant necklace that both boast a rose quartz detail. In an effort to address and quell a surge in anti-Asian racism in the past year, 100 percent of net proceeds from sales of the set will go to the Canada-based Asian Solidarity Fund and Stop AAPI Hate, an American non-profit.

“I saw so much hard work growing up,” Lui says of what inspired the collection and its initiative, and she adds that her mother would communicate with customers via a Vietnamese-English dictionary once the first Paris Jewellers store opened in St. Albert, Alberta. Yet despite the accomplishment of launching and growing a small business (which now has 23 stores in four provinces) — and the realized ambition of “building a better life and future,” as Lui says about her parents — the family has had their experience demeaned by incidents of racism they’ve continually encountered while in Canada. It’s an issue, she points out, that’s been exacerbated by the COVID-19 pandemic.

“Growing the business, we’d hear that our brand has to be more ‘Canadian,’” she recalls. “And around a year ago, we started getting messages saying, ‘Please don’t use the Canadian flag. You’re not a Canadian company.’ We felt really discouraged. These are things I try to forget, but I’ve learned through the power of being honest and vulnerable and sharing our story, we can make a difference.”

Until recently, you wouldn’t find photos of Lui and her sister in any marketing materials produced for Paris Jewellers. “It felt like for every person that celebrates [our background], there’s another person who says, ‘Don’t say you’re a Canadian company if your owners aren’t from here.’” But Lui goes on to say that she and her family have made a commitment to sharing their story in order to inspire and uplift. “We have this company and this platform — how do we use it to do good? I want to set an example for my own kids.”

This is one of the reasons behind the creation of the Asian Heritage Hope collection and devising its give-back element; the pieces were introduced today in honour of May being Asian American and Pacific Islander (AAPI) Heritage Month here in Canada, as well as to recognize the birthday of Chau and Trang’s mother, Thu. And the petite pieces are enriched with symbolism, Lui notes. “Rose quartz is one of my favourite stones; it’s known as [a symbol] of universal love and deep inner healing. And we used a hexagon [because] all sides and internal angles are equal. I choose to believe that’s how people should be treated regardless of their shape, their size, their race.”

While this offering honours the fortitude Thu demonstrated to her daughters throughout her life, this isn’t the first time Paris Jewellers has honoured this notion through design. Last year, the brand launched the Resilience collection, which was created to recognize the sacrifices and tenacity possessed by front-line and essential workers of all walks. “We’re so inspired by them,” Lui says. The collection highlights the 2020 Pantone Colours of the Year, yellow and grey, and is composed of artful items rendered with citrine and grey moonstone accents; a portion of proceeds from sales from this collection are donated to The Frontline Fund.

“We want people, when they put these pieces on, to remember their own strength,” Lui says, adding that working on the aforementioned collections was a “life-saver throughout this past year. They gave me hope.”

Paris Jewellers has responded to other issues instigated by the pandemic, including extending financing options for customers who are encountering difficulty after losing a job. “The world has changed, so we have to change and adapt as well,” Lui notes.

One thing she’s noticed that hasn’t changed, but rather evolved, is what jewellery fans are gravitating towards buying these days, including pieces done in yellow gold rather than rose gold (which has captivated customers for several years). And she’s enthused by the notion that once we emerge from the COVID-19 crisis, “people will be super comfortable being bold,” mixing it up and making a statement with their way of dressing. Style is a way of communicating emotion, after all.

And that’s precisely why Lui and her family have taken the approach they have to running their business and being so mindful of the meaning behind their work; she highlights how jewellery, if even purchased for one’s self, is a celebration of some kind. “Jewellery is an emotional buy,” she says. “People have to connect with it.” They have to maintain it, too, and the brand offers a range of care plans for customers to keep their precious pieces clean and in good repair. “We believe jewellery represents a special milestone,” Lui says. “You may have it for your entire life and pass it down for generations to come.”

In this way, the creations found at Paris Jewellers embody the matter of importance at hand with the launch of the Asian Heritage Hope pieces; that history and the future have a through line that must be tended to in order to thrive.