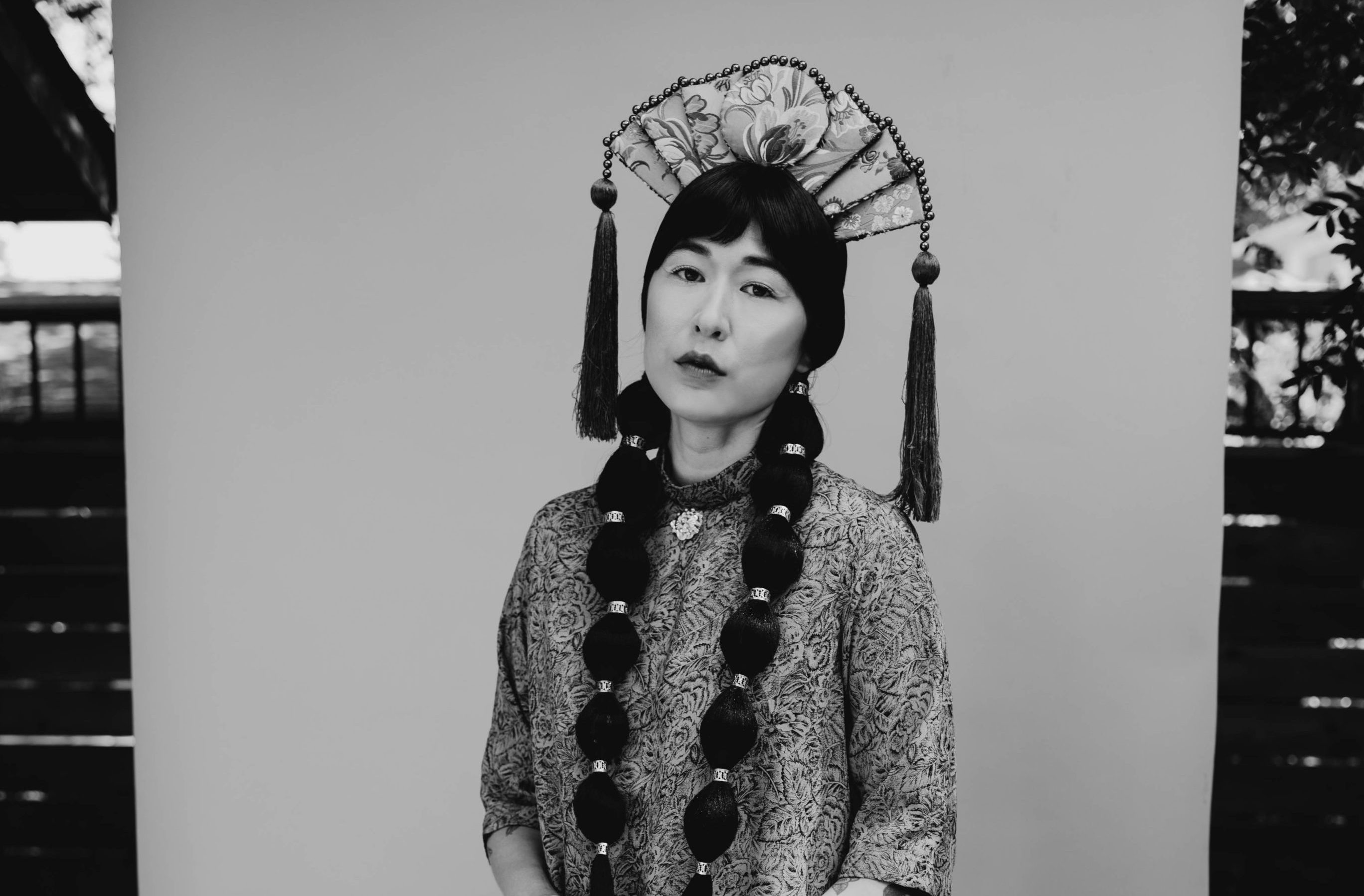 “I’ve been surrounded by maker culture for many years.”

Carrie Yap, founder of the Calgary-based millinery brand Yap Sister (so named because she has siblings), seems to have found her common ground when it comes to making connections. Through her slow fashion-focused label, Yap is able to intertwine the symbolism and storytelling vital to Asian communities and bring the past and present together in her designs. And through her work as an urban planner, she’s come to notice — most palpably over the last year — just how important the concept of community-building is. Interestingly, it’s the parameters of this vocation that set Yap off on a course that’s changed her outlook entirely.

“I don’t get to use my hands that often,” Yap notes of her civic-centric role. “I’m always looking for ways to express myself through my hands.” That’s how she came to learn the craft of hat-making, apprenticing under New York-based milliner Anya Caliendo before launching her own line earlier this year. “There’s something special about touching and moulding fabric — it’s a different process of using your brain,” Yap says. She adds that despite its challenging, creative and therapeutic qualities, the type of millinery she initially learned — the styles most associated with the Western tradition of it (i.e. English-style toppers and Derby-worthy fare) — didn’t click with her.

“It’s not something that resonates with me,” Yap says. “I can appreciate it but can’t relate to it…. I always thought that when I [started] my own brand, I wanted it to relate to who I am. I wanted it to be something I, and others, could see themselves in.”

After doing some soul-searching — and happening upon a book at the Metropolitan Museum of Art by Terese Tse Bartholomew entitled Hidden Meanings in Chinses Art — a new perspective was unlocked. Yap says she was enamoured with the idea that for centuries, the art of her ancestors was imbued with imagery that discreetly presented motifs meant to ward off bad omens. “I love this narrative,” Yap says. “That artists were revealing something about themselves and capturing a time and place, and also that [things] like peonies or phoenixes weren’t just there because they were pretty. They wanted the person who owned the pieces to have some sort of a blessing. I’m trying to emulate that.”

The headwear in Yap Sister’s introductory offering, called Auspicious Expressions, include the Double Coin style, which has a silk shantung and jacquard pillbox shape at its core and loop of leather rings for a brim; but most significantly, its topped with a double knot — a symbol of protection and the circle of life. The Bird Nest hat, on the other hand, brings together cotton brocade, pearl embellishment and feather spines to create a shape the symbolizes home (the nest silhouette itself), freedom and happiness (what birds represent), and wealth (the pearls, natch). New pieces will be released soon, and they explore more “everyday wear” silhouettes rendered in fabrics from several Asian countries.

“I say that I’m inspired by Asian cultures, not just Chinese, and I’m very deliberate about that,” Yap notes when discussing her work. “Borders have changed through history so it’s hard to say one design is exclusively from one region, and a lot of these cultures do weave in and out of one another. [And] I do my due diligence with research to make sure that I do things properly.”

Yap employs an array of materials in her designs, gathered from places like Japan, and Southeast Asian countries including Singapore. She used to travel to source her materials pre-COVID but currently relies on local connections like friends to send her textiles, as well as ordering online. She uses small batches of fabrics for Yap Sister’s hand-made, made-to-measure pieces and ensures they’re organic in origin. “When I’m using a material like horsehair, I do a lot of research to make sure it was ethically sourced, cleaned, maintained,” Yap assures. “It’s about being part of a positive cycle.”

Speaking of cycles, Yap’s foray into making does have precedent; her grandmother “always made clothes for my mom and her siblings, and for me and my siblings,” she notes. “I’ve been surrounded by maker culture for many years.” Yap says that observing the time and effort that went into making these garments gave her a deep appreciation for craft, and that’s why she honours such traditions through her own practice now.

Yap goes on to highlight some key points of interest when it comes to the generational knowledge of artisanal techniques, saying that her grandmother made many pieces for her family in an effort to help them integrate into their Canadian cultural surroundings. And assimilation is a fundamental reason why heritage craft techniques are in danger of becoming obsolete. Yap’s own education in Chinese knot-making, through a friend of a friend of her mom’s, wasn’t readily available, and she says that such elements of craft are in danger of being “lost because people aren’t interested.”

But Yap sees her brand, and her own exploration of self-expression through dressing, as a means of “reconnecting to culture,” and senses  that her customers feel the same way — especially those who are fellow hyphen-Canadians. “What I’ve found from talking to people in my situation is that they don’t know where to turn,” Yap says when it comes to finding points of entry to learn more — and feel a part of — their ancestral community. Noting that her work illuminates that “a fabric itself can tell a story, and a beautiful motif can be a spark of inspiration” for her designs, Yap says that in addition to the impulse to integrate, passed-on traumas within families has contributed to a loss in “history and storytelling. I’m hoping my [hats] can be a little piece in the puzzle.”

When speaking about connecting these dots, and how the pandemic created a strain on her own ability to collaborate — “there’s something special about face-to-face interactions” — Yap does say that COVID-19 also brought people together in the wake of heightened racism and violent acts of aggression.

“There is a lot of anti-Asian hate, [but] there have been a lot of great communities coming together to support one another and talking about what allyship really means, and what inclusivity and diversity is about,” she says. “I appreciate the opportunity to talk about [things like], how do you educate others about marginalized communities and other cultures?” And she adds that having her millinery business has created an oasis of sorts to guide her through difficult moments as they’ve come. “As a maker, you get to create your own world and dive into it. At the end of the day, I have this little studio space to escape into, no matter how hard the day has been.”

One couldn’t help but feel a surge of optimism when wearing a Yap Sister piece, though; and not only because of the meaningful aspects of their design. There’s also a bravado to these looks, and you have Yap’s mother to thank for that. “My mom is bold with her accessories and colour choices,” she says. “I remember being embarrassed by it — other moms would come in wearing like, a grey sweater, and my mom would be wearing a bright yellow tracksuit. Now I think that’s amazing, and she has influenced me in terms of colour and pattern choices.” A positive take on history repeating itself, indeed.